A 20-year-old woman from Pittsburgh was killed in a jet ski collision near Hilton Head Island, South Carolina.

Libya’s coast guard recovered dozens of bodies of Europe-bound migrants Friday, a day after roughly 150 people went missing when their boats capsized in the Mediterranean Sea.

The Anti-Illegal Immigration Agency in the Tripoli said up to 350 migrants were on board boats that capsized Thursday off the town of Khoms, around 75 miles east of Tripoli, in an incident described by a U.N. official as the “worst Mediterranean tragedy” of the year to date.

The migrants include nationals from Eritrea, Egypt, Sudan and Libya.

Libya’s coast guard recovered dozens of bodies of Europe-bound migrants on Friday, a day after roughly 150 people went missing when their boats capsized in the Mediterranean Sea; this is described as “the worst Mediterranean tragedy” of this year.

Source: Eight killed in quake and aftershocks in Philippines, 60 injured

OKLAHOMA, Pa. —The fire that destroyed the historic Hotel Belvedere in Oklahoma Borough, Westmoreland County early Wednesday morning was deemed suspicious.The fire chief told Pittsburgh’s Action News 4 reporter Chris Lovingood that the fire has been deemed suspicious because no utilities were on at the hotel.

The fire broke out shortly after midnight on Orr Avenue. The building is more than 110 years old, and the fire chief said it has been empty for at least two years.

A wildfire in northern Arizona has charred more than 1,000 acres, as hundreds of firefighters vowed Tuesday to save homes and utility lines that could be in the blaze’s path.

The so-called Museum Fire, just north of Flagstaff in the Coconino National Forest, hasn’t been dented yet, despite the efforts of hundreds of firefighters from multiple local, state and federal agencies.

“We have close to 600 personnel on the fire right now as we speak, we have zero containment at this point,” the incident commander, Rich Nieto, told reporters Tuesday morning. “I expect as we go further with this, that’ll go up. For right now, that’s what we’re looking at.”

The victims were struck at Clearwater Beach near Tampa on Sunday afternoon, according to the Clearwater Police Department.

The department said one person was hit by the strike directly and rushed to a nearby hospital in critical condition. Another person was treated for burns and three others were hospitalized as a precaution.

Out of the frying pan, into the fire.Thousands of Big Apple residents lost power just as temperatures reached their zenith Sunday afternoon, according to energy providers.

Some 10,000 Con Edison customers were sweating it out without power as of 6 p.m. Sunday, an outage map provided by the power company showed.

The number was a fraction of that just an hour before, but swathes of Brooklyn began losing electricity just after 5 p.m. — when the heat index reached a blistering 102, according to the National Weather Service, and The Post measured 113 degrees in Times Square.

A water main break has part of a busy road in Overbrook blocked off to traffic.

Pennsylvania American Water officials said a 10 inch water main along the road ruptured, causing low or no water pressure to about 10 customers.

Crews shut down two northbound lanes between Norwood Avenue and Nobles Lane to fix the problem.

PWSA officials said they estimate the work to be completed by Saturday night.

Refresh WPXI.com for updates on when the road is back open

The earthquake was a 5.3 magnitude, according to the U.S. Geological Survey, and hit just after 2 p.m. local time.

People in Athens felt the earthquake as it hit, causing some to run into the streets, per the Associated Press.

(MORE: Another earthquake in California just hours after a quake near Seattle )

The mobile phone network went down and there were some power outages reported around the city. The fire department is responding to calls of people trapped in elevators.

Otherwise, there was no reported serious damage or injuries immediately after the quake. The Acropolis Museum remains open, although many people around the city were sent home from work for the day.

It officially hit about 14 miles from Athens, the Euro-Mediterranean Seismological Center said, and lasted just a few seconds.

Neighbors said they heard a loud “bang” that shook their homes.

A man died after his vehicle somehow ignited and caused an explosion, state police in Fayette County said.

Japanese Prime Minister Shinzo Abe said the apparently deliberate act in Kyoto is “too appalling for words.” The death toll is likely to rise, and a suspect has been taken into custody.

Crews were called around 7:30 to a home on Whiteman Avenue in Uniontown, Fayette County.

Their identities were not immediately released, but officials said they were 1 and 3 years old.

FORT HILL, Pa. – The YMCA of Greater Pittsburgh confirmed to Channel 11 that a 15-year-old boy died after a fall at a wilderness camp in Somerset County.

YMCA officials said early Monday afternoon, the teen boy was attending Teen Wilderness Camp through YMCA Camp Kon-O-Kwee Spencer in Beaver County. Campers from that location were on an outing near YMCA Deer Valley Camp in Fort Hill, which is in Somerset County. It was near the Deer Valley Camp where the teen was critically injured.

He was airlifted to Conemaugh Meyersdale Medical Center where he died.

You can now customize your WPXI News App to receive alerts to breaking news. CLICK HERE to find out how.

Here’s a map showing the location of the camp in Somerset County:

pendulum ride at an amusement park in western India crashed on Sunday, killing at least two young people and injuring 27.

Manali Rajvadi, 24, and Mohammed Zaid Momin, 22, died in the incident at the Amrapali Amusement Park at the Kankaria lake in Ahmedabad, The Times of Indiareported.

The injured park visitors were aged between 16 and 26. Various local reports indicate between three and fourteen were critically injured.

A passerby recorded the moment the pendulum arm detached and fell from the ride. Some people may find the video——upsetting.

#Ahmedabad amusement ride fall at #kankaria killed 2 people and 40 injured
Kankariya lake is developed by government and given amusement park to run by private entities.
Who will be responsible.? pic.twitter.com/HA4SQJT4oe

A 7.3 magnitude earthquake shook the Moluccas islands on Sunday, according to the U.S. Geological Survey, creating panic and causing damage to houses in eastern Indonesia.

A big swath of Manhattan was hit by a blackout Saturday night.

An extensive blackout struck Manhattan on Saturday night as power was lost in Midtown, Hells Kitchen and the Upper West Side.

Street lights were reported knocked out on Columbus Ave. on the Upper West Side, and a power outage was also reported in Rockefeller Center around 7 p.m.

The U.S. Geological Survey reports that a 4.6 magnitude earthquake has rattled the Three Lakes area of Washington state

The quake struck as millions of people in Southern California are on edge and worried about their safety after two large earthquakes and more than 4,000 aftershocks. The powerful, damaging quakes rocked the small desert town of Ridgecrest, 110 miles north of Los Angeles.

A large sinkhole has opened up outside of the Kindercare in North Huntingdon Township. 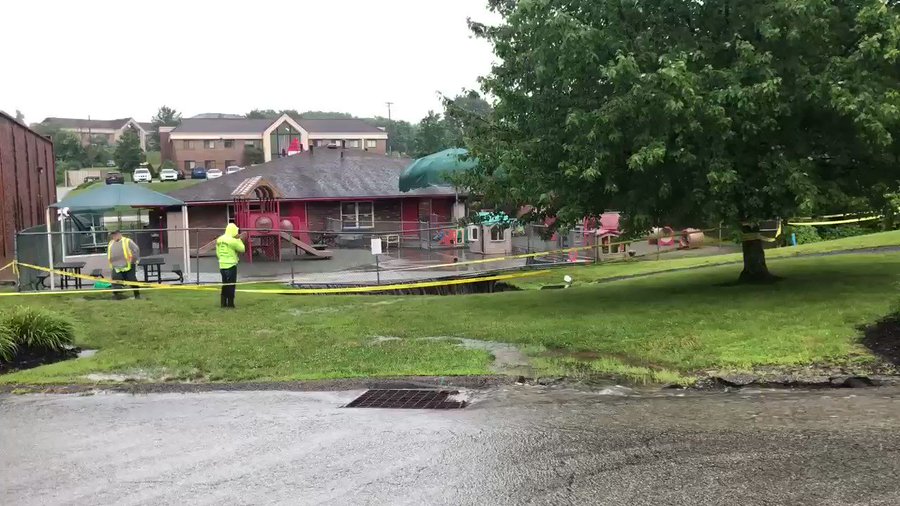 Here’s a closer look. Sinkhole has expanded a bit since we got here. A few nearby streets have also taken on a lot of water. We also spotted a minor landslide blocking one lane of Barnes Lake Road. 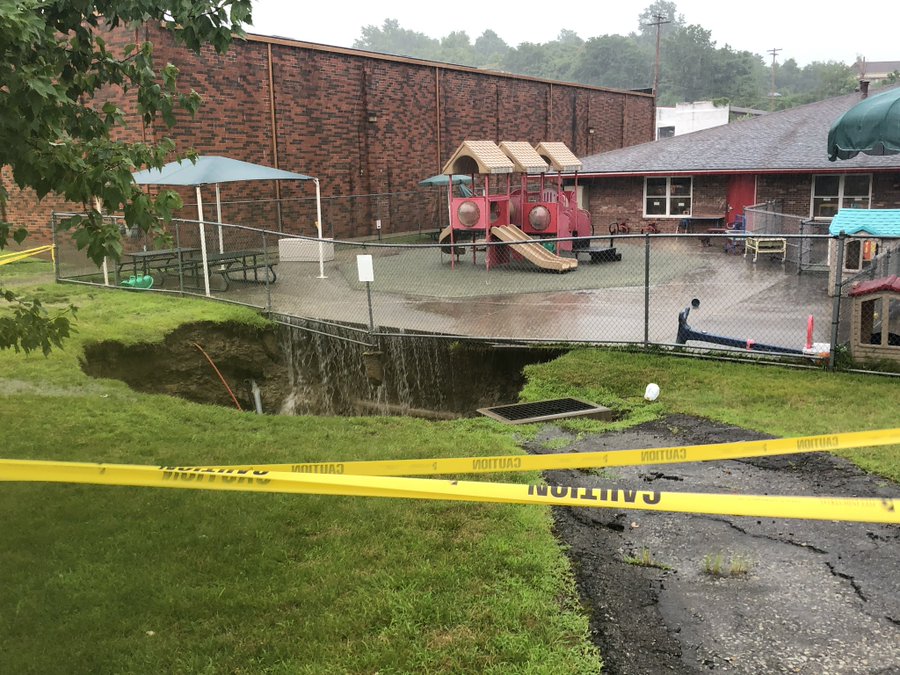 Officer witnessed tree toppling down from hillside onto car

Officials said emergency crews cut the tree off the vehicle while emergency medical services used rescue gear to cut the victims out of the vehicle.

Both women were taken to an area hospital in serious condition.

Police said two passengers in the back seat were able to exit the car unharmed.

The tree blocked three lanes of traffic and was cleared just before 6 p.m.