Second Avenue Commons, a homeless shelter that opened last week in Downtown Pittsburgh, is already at capacity, officials said. “We’re now into the overflow space, which is the cafeteria that’s downstairs,” said Dan Palka, Allegheny Health Network’s director of urban health and street medicine. Palka is collaborating with the city on homeless outreach and other community initiatives. AHN is one of several partners that worked to bring Second Avenue Commons to fruition.

The year-round shelter, which opened Nov. 22, has 90 beds with room for 30 additional overflow beds. There are 43 single-room units. The shelter also offers a daytime program, known as the Engagement Center, and a primary care clinic operated by UPMC.

Police said it happened outside the Brooklyn Food Mart, on the corner of Lincoln and Lemington avenues.

A man working at Brooklyn Food Market said a man carried the 4-year-old girl inside the store after shots were fired, and the woman was still outside.

Police say 15 rounds were fired in the street. They are searching for two suspects who fled in unknown directions.

Police are asking the public to call if they have information about this shooting.

A 4-year-old girl and woman were shot and taken to the hospital.

Source: 4-year-old girl and woman in critical condition after shooting in Pittsburgh

Police said the alleged driver, Norman Vire, 49, of Pittsburgh, was known to have an active arrest warrant.

China has successfully sent a new team of astronauts to its Tiangong space station, a significant achievement that not only marks the country’s first in-orbit crew handover but possibly also the beginning of continuous occupancy at the station.

The rendezvous in space marks a milestone for China’s rapidly advancing space program as Beijing aims to catch up with and eventually surpass the United States as the dominant power in space.

The rescue teams are continuing their search operations amid bad weather with the danger of more landslides. Several people, including the local mayor, have been saved from the mud.

With the Mauna Loa volcano continuing to erupt on Hawaii’s Big Island, local officials and residents are keeping an eye on the lava flow as it creeps closer to a major roadway and making plans for the possibility that access to the highway could soon be cut off and have a major impact on daily life.

The fountains of lava that began pouring from Mauna Loa this week marked the first time it has erupted in 38 years, joining nearby Kilauea, which has been erupting since last year, and creating rare duel volcanic eruptions on the Big Island. At 13,681 feet above sea level, Mauna Loa is the world’s largest active volcano.

Source: Lava from Mauna Loa is less than 4 miles from a key highway. Officials say they have a plan in case the road closes | CNN

A Greensburg man is accused of breaking into a Latrobe store and stealing $4,240 worth of lottery tickets and cigarettes, according to a criminal complaint. Patrick S. Barry, 35, who told a judge he is homeless during his arraignment Tuesday, is charged with burglary, theft and criminal trespass.

The singer-songwriter, behind some of the group’s biggest hits, dies after an illness, her family says.

The House on Wednesday will vote on legislation to avert a rail shutdown following a grave warning from President Joe Biden about the economic danger posed by congressional inaction.

A Pittsburgh’s Action News 4 news crew observed a body next to a home, and police on the scene said a homicide investigation was underway.

A Pittsburgh Public Safety spokesperson said there was a shell casing near the body.

The name of the man who was killed has not been released.

A Pittsburgh Public Safety spokesperson said the Allegheny County Medical Examiner’s office will determine the cause of death.

Source: Man found shot to death on Pittsburgh’s North Side

McKeesport Police Chief Adam Alfer confirmed that one woman, one man and one juvenile female had been shot, all in the lower extremities. None of them suffered life-threatening injuries.

Alfer said that there were at least two shooters in what started as a family dispute. One person left the scene, returned and shots were fired.

Pittsburgh’s Action News 4 spoke with a woman who called 911 after she heard the first found of gunfire there.

“I heard the first set, came out and looked. And then I heard my neighbor above me say he saw somebody laying on the ground. I thought, OK. So, I called the dispatcher, 911. She heard the second round while we were on the phone.” said Colleen Morgan. “She said, ‘Is that what you heard?’ I said yeah but I’m not going up there. because, you know, I don’t want any danger.”

She estimates she heard as many as ten rounds during each burst of gunfire. 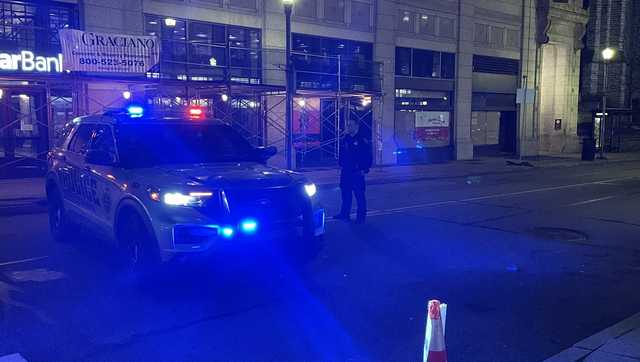 Police were involved in the area around Sixth Avenue and Coffey Way.

Two people were taken into custody and a police officer was injured in a pair of violence incidents in Downtown Pittsburgh on Tuesday evening.

Around 7:20 p.m., police were called for a fight that broke out at the Five Guys Burgers and Fries at Market Square.

A police officer suffered a hand injury after trying to break up the fight. The officer was taken to the hospital for treatment.

One minor was arrested on scene for assaulting the officer, Pittsburgh Public Safety said in a news release.

Police said when officers arrived at that scene several men ran off, including Jasyean Randall, 18, of Pittsburgh.

According to court paperwork, a plain clothes officer later heard Randall and others talking about beating up a cop.

The officer who heard that statement, as well as uniformed police, confronted the group.

The U.S. Senate passed a bill on Tuesday that would protect federal recognition of same-sex marriage, a measure taken up in response to worries the Supreme Court could overturn a 2015 decision that legalized it nationwide.

Someone who bought a Pennsylvania Lottery ticket at a Giant Eagle grocery store hit the jackpot for over $539,000.

The winner’s name is not yet known. The ticketholder has one year to come forward and claim the prize.

The store will get a $5,000 bonus for selling the ticket.

A baby product company has recalled around 10,500 sippy cups and bottles over lead poisoning risks.

The bottles and cups were sold at Buy Buy Baby and Whole Foods stores and online at Amazon and Bed, Bath and Beyond, according to the notice.

The recalled stainless-steel bottles and cups bottom base can break off, exposing a solder dot that contains lead, posing a lead poisoning hazard to the child.  Lead is toxic if ingested by young children, and can cause adverse health effects.

The fire was reported off of Twin Run Road in Hempfield Township, Westmoreland County, a little before 3 a.m. Tuesday.

The homeowner said photos and other items were inside that pool house.

Several firefighters were called to the scene and there was a reported issue with water supply.

No one was hurt.

There was no word on what sparked the fire.

The world’s largest active volcano, Mauna Loa on Hawaii, is erupting for the first time in nearly 40 years.

Source: Hawaii’s Mauna Loa is erupting for the first time since 1984 | CNN

One of two brothers charged in a suspected mid-October shootout in Harrison Township was arrested Monday morning. The U.S. Marshal Western Pennsylvania Fugitive Task Force, working with police from Pittsburgh, Tarentum and Allegheny County, arrested Troy Vickers, 30, of Tarentum. A felony arrest warrant is still active for his brother,

Pittsburgh’s rookie quarterback turned in his best game while Indy’s offense continued to struggle, and fell short at the end.

A 23-year-old woman originally reported missing from Cleveland was found shot to death in a Wilkinsburg backyard on Thanksgiving, according to the Allegheny County Office of the Medical Examiner. The body of Adrianna Kiri Taylor was discovered shortly after 9:30 p.m. Nov. 24, in a backyard on the 800 block of Hill Avenue in Wilkinsburg.

Taylor was initially listed as missing by Cleveland police on Nov. 13, and her family told police they had not heard from her since early October.

County medical examiners said Taylor died of a gunshot wound to the head. The case has been declared a homicide.

Cleveland TV station WOIO reported that the investigation is being handled by both Cleveland police and the city’s Federal Bureau of Investigation office.

Just before 2:40 a.m., Pittsburgh Police from Zone 2 were informed that an adult male with gunshot wounds to his leg had been dropped off at the hospital.

He arrived in stable condition. The victim spoke with police but was not forthcoming about how he received his injuries.

Officers from Zone 6 later located a scene inside a residence in the 2900 block of Sacramento Avenue and spoke with the occupants. The Mobile Crime Unit processed evidence.

PITTSBURGH (KDKA) — A vehicle crashed over a hillside in Whitehall on Sunday.

The Whitehall Fire Company says that the driver of the vehicle was able to get out before first responders arrived.

Firefighters helped stabilize the vehicle to keep it from going any farther down the hill and potentially into a home.

It’s unclear if the driver was injured.

A plane was suspended 100 feet in the air after it crashed into power lines in Maryland. 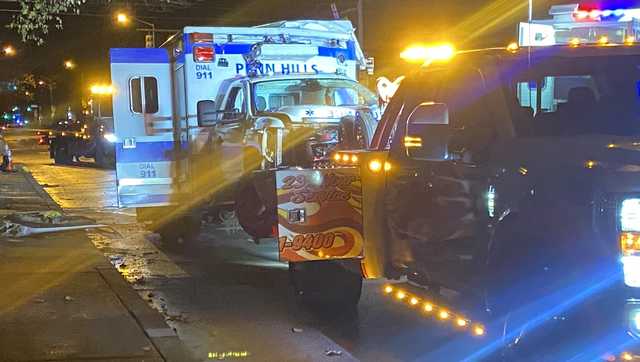 Investigators were on scene for over five hours working to figure out the cause of the crash.

Pittsburgh Public Safety said Pittsburgh EMS found a man behind the wheel of the ambulance in cardiac arrest, he was rushed to the hospital, where he later died.

The passenger in the ambulance suffered head trauma, facial lacerations, and a possible concussion, according to police.

The driver of another vehicle involved had stomach pain. Both this driver and the passenger of the ambulance were taken to the hospital and are listed in stable condition.

A hailstorm damaged cars and homes across Washington, Fayette, and Westmoreland Counties Sunday.

Nathan Utz in Perryopolis found dozens of small dents in his truck.

“Some things outside were blowing around, so I came out to try to recover them before they got to the neighbors. By the time we got to the garage here, it was heavy hail, at least golf ball size,” Utz said.

The hail also left numerous holes in the siding of houses.

Meldon Avenue in Donora was closed after power poles brought down lines into the street.

“I’ve never experienced hail like we did today,” Utz said.

No serious injuries were reported after a car crashed into a business in neighboring Armstrong County last week.

According to State Police, 20-year-old Carley Rosenberger of Ford City was traveling on River Road in Parks Township just before 4am on Thursday (November 24th) when she allegedly crashed into River Road Six Pack.

Authorities say that Rosenberger suffered minor injuries in the crash, and was taken to a local hospital for treatment.

During their investigation, police determined that Rosenberger was driving under the influence at the time of the crash.

Two Blair County men are facing multiple charges after a traffic stop revealed they had outstanding warrants and over $50,000 worth of drugs on them, police say