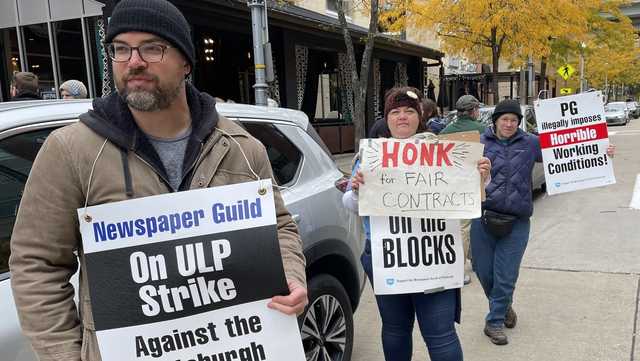 The Newspaper Guild of Pittsburgh said in a news release that Post-Gazette management failed to end what the guild calls the paper’s “illegally declared impasse to contract negotiations, lift the unilaterally imposed working conditions and reinstate the terms of the previous collectively bargained contract, and return to the contract bargaining table to reach a fair contract with the 101 journalists the Guild represents.”

“The workers who produce the Post-Gazette are taking a stand against the hostile and illegal treatment at the hands of John and Allan Block,” Newspaper Guild President Zack Tanner said in a statement. “We, the workers, are standing together today, ready to fight to win back our contract and work toward signing a new collective bargaining agreement that preserves the Post-Gazette for the Pittsburgh region.”

The Newspaper Guild said it has been in negotiations for a contract with PG management since 2017.