Kirk Douglas, the legendary actor who was one of the last remaining stars of Hollywood’s Golden Age, has died at the age of 103.

PITTSBURGH (KDKA) — If you noticed helicopters flying and hovering over the city last night, there was no cause for alarm; it was just film crews continuing work on Jason Momoa’s newest Netflix movie.

“Sweet Girl” started filming right here in and around the Pittsburgh area in late 2019. Production is now continuing into the new year.

Crews were spotted near the Golden Triangle over the weekend.

A camera rig, attached to the back of a car, was set up along Stanwix Street and Liberty Avenue.

There were also lighting crews and service trucks in Gateway Center.

The helicopters flying over PNC Park and the David L. Lawrence Convention Center were also part of the excitement.

However, there were no Momoa sightings.

IMDb says he will play a grieving father protecting his daughter while trying to get justice in his wife’s death.

Neil Peart, the longtime drummer and lyricist of the band Rush, has died at age 67. The Rock and Roll Hall of Famer died in Santa Monica, California, on January 7 after battling brain cancer, CBS Los Angeles confirmed.

Peart’s bandmates made an emotional tribute to him on Twitter, saying he battled the cancer for three-and-a-half years and calling him their “soul brother and band mate of 45 years.” In asking for privacy, they urged those who want to express condolences to do so by donating to a cancer research group or charity.

The “Grease” and “77 Sunset Strip” star died unexpectedly of natural causes on Wednesday at his Santa Monica, Calif., home, a press release, shared by his son, Logan Byrnes, said.

“His is the story of an ambitious young kid who, in his 20s drove out to Hollywood from New York City with a few hundred dollars and a dream of making it big in the entertainment business,” read the release.

BUCK HENRY, A SCREENWRITER OF ‘THE GRADUATE,’ CO-CREATOR OF ‘GET SMART,’ DIES AT 89

It continued: “He soon landed a staring role on the wildly popular TV series ’77 Sunset Strip’ as the cool-talking ‘Kookie.’ He went on to star in dozens of motion pictures and television series popular around the world, including playing the suave and debonaire ‘Vince Fontaine’ in ‘Grease.'”

Ron Howard responded to a fan’s question about Hollywood’s perception of Donald Trump, whom the director called “morally bankrupt”

Source: ‘Do the Right Thing’ Star Danny Aiello Dead at 86

Actor Jason Momoa, best known for starring as DC Comics’ “Aquaman,” is coming to Pittsburgh to shoot a new feature film for Netflix.

Ex-Jets wide receiver Terrelle Pryor was seriously injured in a stabbing attack in his luxe apartment complex in Pittsburgh, reports said.Pryor, 30, was stabbed in the chest and shoulder sometime

There’s a pretty good chance she won’t ever change it again.

She waited for months to upload that photo of her standing next to Tom Hanks. She idolizes the actor. She can recite most of his movie lines from the likes of “Big” and “Forrest Gump.”

Levers wasn’t allowed to upload it until the movie “A Beautiful Day in the Neighborhood” premiered nationwide last week. Hanks plays Pittsburgh’s favorite neighbor, the late Fred Rogers. The connection between Levers and Hanks began when she was 13 years old. Her father had died. She turned to watching Hanks’ films to help her through her grief.

“She was initially evaluated at Sibley Memorial Hospital in Washington, D.C. before being transferred to Johns Hopkins Hospital for further evaluation and treatment of any possible infection,” the court said in a statement. “With intravenous antibiotics and fluids, her symptoms have abated, and she expects to be released from the hospital as early as Sunday morning.”

Former Fox News anchor Shepard Smith made a surprise donation of $500,000 to the nonprofit Committee to Protect Journalists during a speech Thursday night in which he did not mention Donald Trump by name, but alluded to him on multiple occasions. “Intimidation and vilification of the press is now a global phenomenon,” Smith said. “We don’t have to look far for evidence of that.” The speech at the International Press Freedom Awards dinner was the first public appearance for Smith since he abruptly left the channel last month. “We know that journalists are sometimes wary of being perceived as activists for some cause,” he said. “But press freedom is not the preserve of one political group or one political party. It’s a value embedded in our very foundational documents. Journalists need to join hands to defend it.” Smith was a founding staffer of Fox News, where he worked for the last 23 years.

Read it at The New York Times

– Single of the Year: “God’s Country” by Blake Shelton

Blake Shelton accepts his CMA Award for Single of the Year. (Photo by John Shearer/Getty Images)

– Group of the Year: Old Dominion

– Music Video of the Year: “Rainbow” by Kacey Musgraves

– Album of the Year: “GIRL” by Maren Morris

– Entertainer of the Year: Garth Brooks

“He is resting comfortably and looking forward to getting back to work,” the show’s representatives tweeted.

Our taping on Thursday was canceled because host Pat Sajak underwent successful emergency surgery to correct a blocked intestine. He is resting comfortably and looking forward to getting back to work. Taping resumed today as scheduled and Vanna White has stepped in as host. 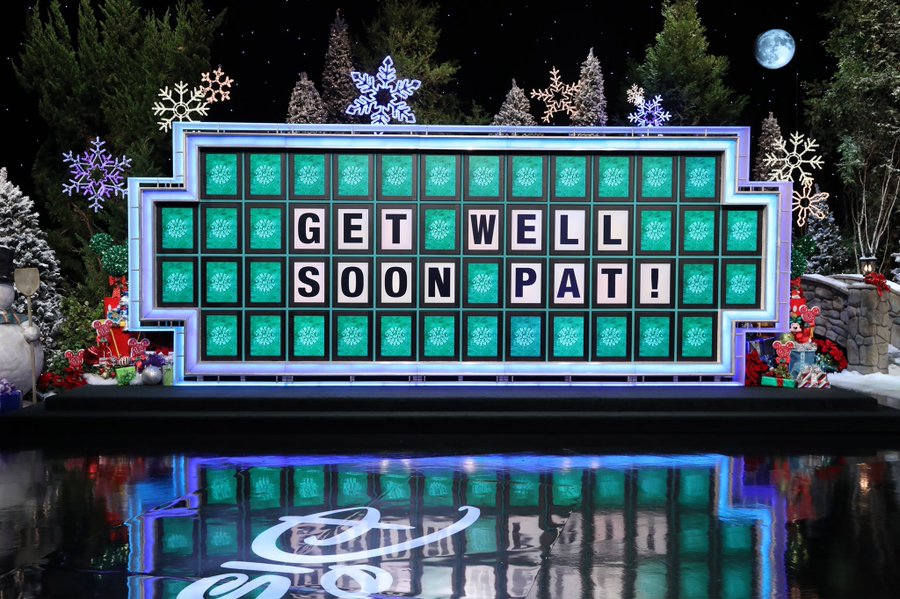 1,150 people are talking about this

Wheel of Fortune is in its 37th season of syndication, according to CBS. Sajak and White have hosted the show together since its debut.

Ringo Starr and his All-Star Band are bumping up from Heinz Hall to PPG Paints Arena.

The former Beatle drummer will bring his ensemble there on June 20.

Kanye West’s new studio album Jesus Is King was originally slated for release today (September 27), however the album has yet to materialize. After hosting a Sunday Service performance in Detroit, as well as a listening event at the city’s Fox Theatre, Kanye’s wife Kim Kardashian West has announced that the new album will arrive Sunday (September 29). “Kanye is doing a listening session in Chicago tomorrow, then NYC Sunday” Kim wrote in an Instagram story (viewed by Pitchfork). “He’s dropping the album Sunday. Just a few final tweaks to the mixes.”

Some people wait a lifetime for a reunion like this!

On an episode of The Kelly Clarkson Show that aired on Wednesday, host and singer Kelly Clarkson reunited with the three people that helped make her famous: Simon Cowell, Paula Abdul and Randy Jackson. This marked the first time all three original American Idol judges have reunited together with Clarkson since she won the first season of the show in 2002, which kickstarted her now-Grammy-winning music career, not to mention her new status as a TV star.

“I actually genuinely do not believe we would be sitting here today if you hadn’t entered the show that year,” Cowell said. “The whole premise of the show was we had to find a star who was gonna sell records. We found some great people that whole year but when you delivered that moment on that first live show, when you sang that winning song at the end-“

In June 1976, Joseph Finegold told The Pittsburgh Press that it was “the most horrible thing I have ever seen since World War II.” He was talking about ZZ TOP.

The ex-Alaska governor and her husband found it “impossible to live together”, court documents show.

The Palins, both 55, married in 1988 and have five children together.

The documents mention “an incompatibility of temperament between the parties such that they find it impossible to live together as husband and wife”.

They include the initials rather than full names of the two parties – SLP for Sarah Louise Palin and TMP for Todd Mitchell Palin – but identify the couple’s marriage date and the birth date of their only child who is a minor, Trig Palin.

They are asking for joint custody of the child, according to the papers.