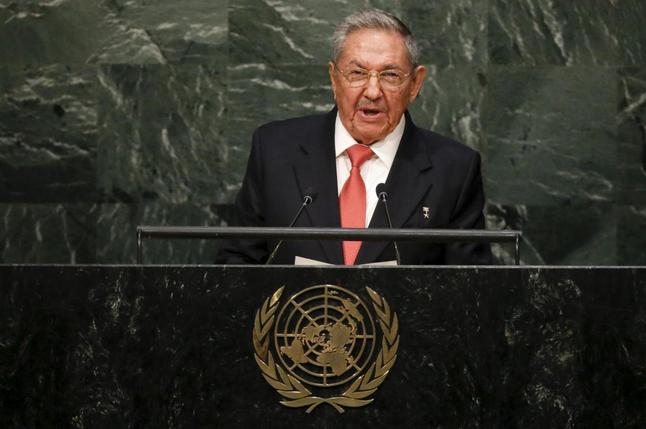 Cuba’s President Raul Castro, speaking at the United Nations for the first time, on Saturday hailed renewed diplomatic ties with the United States as “major progress” but slammed a U.S. trade embargo as the top obstacle to Cuba’s economic development.

Castro and U.S. President Barack Obama in December announced a detente following more than half a century of animosity between the former Cold War foes that culminated in the restoration of diplomatic relations on July 20.

Although Obama has taken steps to ease trade and travel restrictions, only the U.S. Congress can lift the full embargo and that is not viewed as likely at the moment.

The embargo is “the main obstacle to our country’s economic development, while affecting other nations due to its extraterritorial scope, and hurting the interests of American citizens and companies,” Castro told a U.N. summit of world leaders on sustainable development.

“Such policy is rejected by 188 United Nations members states that demand its removal,” he said, referring to an annual U.N. General Assembly resolution that has condemned the U.S. embargo for more than two decades.

Cuba estimates the embargo has caused $121 billion in damage to its economy. It has launched a campaign for the General Assembly to again adopt the resolution calling for the embargo to be lifted.

U.N. diplomats, speaking on condition of anonymity, said that Washington is considering abstaining from the U.N. vote on the resolution, provided the draft text is amended from previous years to tone down the criticism of the United States.

Adoption of the resolution has become an annual ritual. The United States and Israel have always voted against the declaration. While the General Assembly’s vote is nonbinding and symbolic, it has served to highlight U.S. isolation regarding Havana.

Castro is due to address the annual gathering of world leaders at the U.N. General Assembly on Monday for the first time as president. Castro, 84, took over from his ailing brother, Fidel, provisionally in 2006 and definitively in 2008.