MILLVALE, Pa. – Pittsburgh Food Truck Park, is the first of its kind in western Pennsylvania.

Located along the Allegheny River near the 40th Street Bridge in Millvale, the park offers spots for five food trucks to park. It’s accessible by car, bike or boat.

According to the Food Truck Park’s calendar, they’ve got a good mix of cuisines available on opening weekend including pierogis, brisket, ice cream mac ‘n cheese and more. 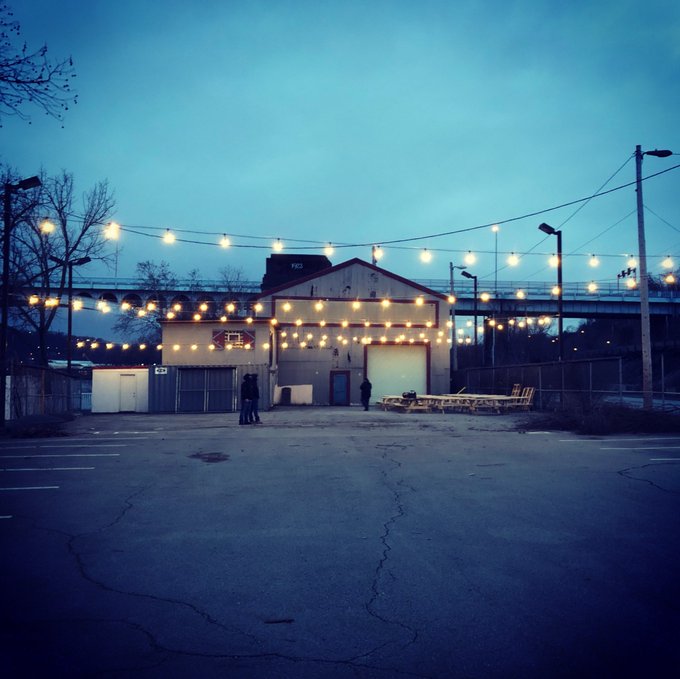 There’s a bar featuring local draft beers, several fire pits and a game yard so people can hang out an enjoy their food with family or friends Firefighters helped to rescue a man who drove his vehicle off a South Greensburg road and traveled about 50 yards before getting stuck in the fast-moving Slate Run in Hempfield on Wednesday afternoon.

Midway-St. Clair Fire Chief Rich Kepple said they assisted the driver out of his vehicle, which had water about halfway-up the front door. The driver, who was not identified, was talking to firefighters while inside the vehicle. The accident was reported at about 4:25 p.m., a Westmoreland County Department of Public Safety supervisor said.

The driver was taken to Excela Westmoreland Hospital in Greensburg for observation, Kepple said.

BROOKFIELD, Ohio (KDKA) — An Ohio man is facing charges after he allegedly screamed at a woman and hit her in the face with a pizza Wednesday.

WKBN reports when officers arrived at the Masury home early Wednesday morning, they heard yelling inside, and when an officer tried to open the door, 24-year-old Kenneth Evans slammed it shut.

Police said Evans was screaming, belligerent and highly intoxicated, and the house was “trashed.”

Evans told police he had been arguing with a woman and flipped over a couch, but did not touch her.

The woman said when they arrived at the home, Evans tried to fight a neighbor, threw tires into the road and smashed a mailbox.

WKBN says police arrested Evans on domestic violence charges and took him to the Trumbull County Jail, where authorities repeatedly told him to “stop boxing the wall.”

Republican congressional candidate Rick Saccone is scheduled to speak at a pro-gun rally this month in Greensburg.

The April 22 rally at the Westmoreland County Courthouse was organized to support Rostraver police Officer Martin Palla, who faced backlash after standing with an AR-15 slung over his shoulder while March for Our Lives participants rallied across the street last month in Greensburg.

“Rick will be attending the rally and will be happy to say a few words in support of protecting our Second Amendment rights,” campaign spokeswoman Caitlin Carlisle said Wednesday in a statement.

NIPAWIN, Saskatchewan — Canadian police said early Saturday 14 people were killed and 14 people were injured after a truck collided with a bus carrying a junior hockey team to a playoff game in Western Canada.

Police say there were 28 people, including the driver, on board the bus of the Humboldt Broncos team when the crash occurred around 5 p.m. Friday on Highway 35 in Saskatchewan.

“We can now confirm fourteen people have died as a result of this collision,” The Royal Canadian Mounted Police said in a release early Saturday.

Windsor residents are listing their homes on Airbnb for royal wedding tourists.

By renting out their homes and parking spaces to tourists, now some locals are hoping to cash in and even fund their own major life events.

Bill Hutchinson, 37, and his partner Annie have listed their luxury three-bedroom cottage on home rental website Airbnb for a nightly rate of £3,500.

“We bought the house last year and we have had a baby so we were looking for ways to make some extra money,” he said.

Despite having no bookings yet, he remains hopeful with still six weeks to go until Prince Harry and Meghan Markle tie the knot on 19 May.

A man was fatally shot outside his Ohio Township home, and the suspect killed himself when police officers arrived at the house, Allegheny County homicide investigators said Thursday.

James Westover, 56, was shot by Lex Miller, 62, when he came out of the house on Rebecca Street and got into his truck to leave for work shortly before 5:40 a.m. Wednesday, police said.

Does your child suffer from food allergies? Baby wipes may be the cause, according to a new report.

Researchers from Northwestern University recently conducted a study, published in the Journal of Allergy and Clinical Immunology, to determine the environmental and genetic factors associated with the allergy.

To do so, they examined clinical evidence on food allergies. They learned that 35 percent of those with them have three gene mutations that diminish the skin’s barrier, which can expose the body to allergens.

However, they learned not everyone with the mutations develop food allergies. After exposing mice with similar mutations to food allergens like peanuts, they discovered the nuts alone had no effect.

“Then I thought about what are babies exposed to,” lead author Joan Cook-Mills said in a statement. “They are exposed to environmental allergens in dust in a home. They may not be eating food allergens as a newborn, but they are getting them on their skin. Say a sibling with peanut butter on her face kisses the baby. Or a parent is preparing food with peanuts and then handles the baby.”

Backpage.com, the website known for its sex and prostitution-related classified advertisements, was shut down and seized by the Federal Bureau of Investigation on Friday, according to reports and a large notice displayed on the site’s homepage.

Cindy McCain, the wife of Arizona Sen. John McCain, and an activist against human trafficking, told AZ Central that she heard that in addition to raiding Lacey’s home, every office of the site around the world was raided.

“They’ve confiscated everything and shut the website down,” McCain said, adding that Friday was a “good day.”

About 14,200 drivers a day will be detoured through Downtown and the North Shore when the ramp from southbound Route 65 to northbound Interstate 279 and Route 28 closes Monday for construction, PennDOT says.

All traffic will be detoured across the Fort Duquesne Bridge and should take the Fort Duquesne Boulevard ramp, turn left at Ninth Street to cross the Rachel Carson Bridge, then turn right onto East General Robinson Street. Drivers continuing to northbound I-279 should take the East Ohio Street ramp to Madison Avenue, then take the I-279 ramp from there. Drivers going to Route 28 can follow signs from East General Robinson Street. Police will be posted at key intersections to assist traffic movement.

Matthew Santoni is a Tribune-Review staff writer. Reach him at 724 836 6660, msantoni@tribweb.com or on Twitter @msantoni.