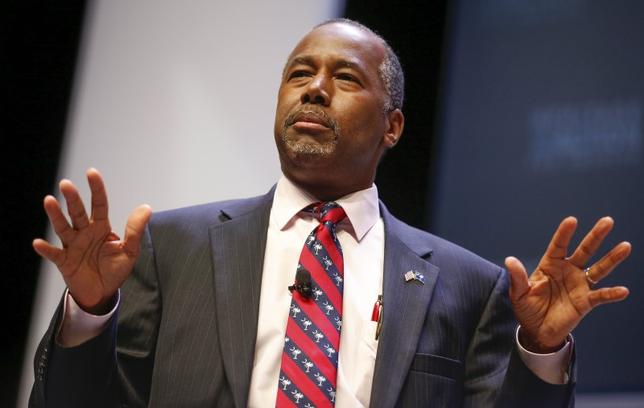 Republican presidential candidate Ben Carson on Sunday said Muslims were unfit to be president of the United States, arguing their faith was inconsistent with American principles.

“I would not advocate that we put a Muslim in charge of this nation. I absolutely would not agree with that,” Carson told NBC’s “Meet the Press.”

The remarks by Carson, who is near the top of opinion polls for the crowded field of Republican candidates, followed a controversy that erupted when front-runner Donald Trump declined to challenge anti-Muslim comments made by a supporter on Friday.

Carson said he thought a U.S. president’s faith should be “consistent with the Constitution.”

Asked if he thought Islam met this bar, the retired neurosurgeon said: “No, I do not.”

Carson gave up some ground in a CNN/ORC poll released on Sunday, slipping to third place from second with 14 percent of support. Sixteen Republicans are seeking the party’s nomination for the U.S. presidential election in November 2016.

The CNN/ORC poll showed Trump, a real estate mogul and former reality TV star, continues to lead the contest with the support of 24 percent of registered voters, down from 32 percent in a previous poll. bit.ly/1OnmXrB

Carson’s comments drew scorn from Republican Senator Lindsey Graham, another presidential candidate though one who garnered under 1 percent support in the CNN/ORC poll.

“I think Dr. Carson needs to apologize,” Graham said, saying the comments were particularly offensive to U.S. soldiers who are Muslim.

But other Republicans tread more softly around the issue, highlighting its salience among some voters. Senator Rand Paul of Kentucky, who had 4 percent support in the CNN/ORC poll, told CBS’s “Face the Nation” that a president’s religion shouldn’t matter but he understood the rise of anti-Islamic sentiment because “we were attacked by people who were all Muslim.”

A Des Moines Register/Bloomberg poll conducted in January in Iowa, the first state to vote in the nominating contest, showed 39 percent of Republicans see Islam as inherently violent. Thirteen percent of Democrats held that view. buswk.co/1NFcUwB

Ohio Governor John Kasich, another laggard in the polls for Republican nominees, told NBC he didn’t know if a president’s religion mattered.

Speaking to NBC on Sunday, Trump was asked whether he’d accept a Muslim president, and replied: “Some people have said it already happened.”